Bios of the Band Directors 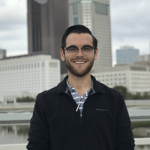 Todd Fessler is the current Director of Bands at Upper Arlington High School. He earned a MM in Wind Conducting at The Ohio State University where he studied with Dr. Russel Mikkelson and served as a graduate assistant director. He was previously the director of bands at Mt. Gilead Schools in Mt. Gilead, Ohio, where he conducted the concert bands at the middle school and high school. He also taught jazz band, beginning band and marching band, and led the pit orchestra and pep band. Mr. Fessler earned his Bachelor of Music degrees in music education and trumpet performance from The Ohio State University. Kolin Redman returned to teaching in the Upper Arlington City School District in 2008. Previously, he taught band for 9 years in the Battle Creek Public School system in Battle Creek, Michigan. His experience also includes private brass instruction with The Music Center of South Central Michigan. Mr. Redman is an active performer in various jazz ensembles. He earned a Master of Arts degree in Music Education from The Ohio State University. He has a Bachelor of Arts degree in Music Performance from Hope College.